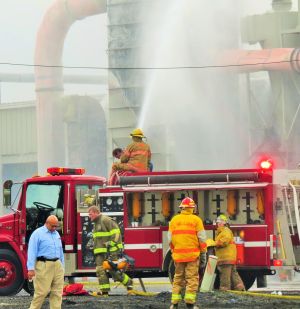 Investigators with the State Fire Marshalâ€™s Office have determined the most recent fire at the Winnsboro Recycling Rubber plant was caused by accidental ignition caused by mechanical friction.

The April 3 blaze was the second in four years at the plant located in the Industrial Park north of Winnsboro. Authorities said it was the alertness of the plantâ€™s employees and their quick actions that limited the damage this time around.

“The operators noticed hoses burning and they were able to act quickly and extinguish the fire there on the spot,” Brant Thompson of the State Fire Marshalâ€™s Office said.

“The (Winnsboro) fire department was later called upon to extinguish the smoldering fire in the large storage unit outside, because thatâ€™s difficult to extinguish without the proper resources,” he added. “Fortunately, the operators at the plant were very attentive and that limited the damage.â€

Thompson said only one of the numerous storage units was damaged and the plant was operational the day after the accident.

“There is some damage to the vacuum unit in the storage bin, but fortunately there was no damage to the interior of the structure so to speak of,â€ Thompson said. “By the time we made it there the following day (April 4), the plant was back up and running. I think one unit was shut down and that was the one dealing with the vacuum in which the fire occurred.”

Investigators said it was likely mechanical friction that ignited fibers inside two hoses that connected to a large storage unit. “Those fibers acted much like a hay bail on fire, or when cotton burns, and it did take some time to cool that entire product down and extinguish it,” Thompson explained.

It took fire crews six hours on the scene before fully extinguishing the rubble, according to the report. Thompson said that no injuries occurred and the actions taken early played a big role in keeping a handle during a hostile situation.

“Fortunately for everyone, the employees took immediate action and were attending to the fire by the time emergency responders arrived,â€ he said.