UK campus to reopen after fire and dust explosion 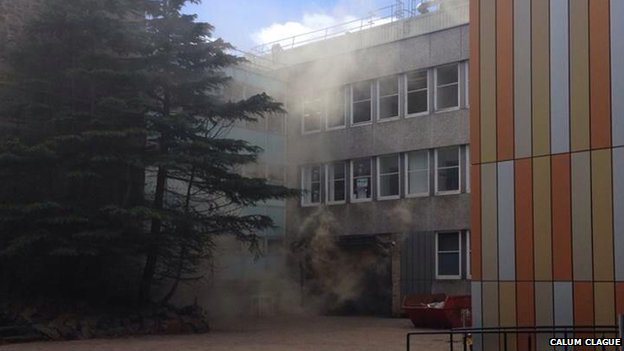 Edinburgh Napier’s Merchiston campus is set to reopen on Wednesday after a fire and “dust explosion” forced hundreds of students to be evacuated.

About 40 firefighters were called to the blaze at 10:30 on Tuesday. Overheating woodwork equipment started a fire and embers then ignited an explosion.

There were no injuries as staff and pupils evacuated the building.

Students and staff are being updated by email and social media.

Scottish Fire and Rescue Service said the overheating equipment at the Merchiston campus had caused a small fire which was extinguished by students, but the university activated its evacuation procedures.

Shortly afterwards firefighters discovered a build-up of dust, combined with embers from the equipment fire, had entered the extraction system, causing a dust explosion and a second fire.

The extraction system vacuums dust away from the machinery and deposits it into holding bags on the lower ground floor.

Temporary Watch Manager Billy Webster said: “This was a very unusual incident. In 25 years as a firefighter I have never experienced a dust explosion.

“Because the embers entered the holding bags and the fire was burning sawdust it meant there was thick smoke logging in the building, which presented a challenge for firefighters.”

He added: “The fire damage was mainly confined to the extractor machine although there was considerable smoke damage on the first floor.”

An Edinburgh Napier spokeswoman said: “We apologise for any inconvenience caused to our students. The fire service, who were quickly on the scene, have described the incident as a very unusual event.

“We are pleased to report that staff and students at the campus were able to evacuate the building safely and no-one was injured.”

The spokeswoman went on to confirm that all of the university campus, apart from the woodwork shop where the fire began, will be reopened by Wednesday morning.

The spokeswoman added: “There will unfortunately be a residual smell of smoke and staff and students should be aware that due to the sensitivity of our alarm system, this may trigger the fire alarm.”