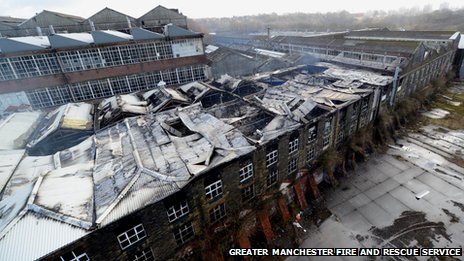 A huge fire has broken out at a former asbestos factory in Rochdale, Greater Manchester, the fire service said.

About 50 firefighters tackled the blaze after being called out just before 03:00 GMT to the old Turner and Newall site in Spodden Valley.

Manchester Fire and Rescue Service said the fire was now under control.

He said: “We have identified some asbestos within the structure [of the factory] – but that has been contained into the area as it was covered by metal sheeting.

“Having assessed the immediate area downwind from the fire, I’ve deemed that it is safe.”

The fire service said the blaze had engulfed all three floors of the derelict building.

Firefighters will remain at the scene throughout the day damping down.

A spokesman added surrounding roads are still closed but there should be minimal disruption to schools and businesses in the area.

Rochdale Council refused planning permission for 600 homes to be built on the site in January 2011.

Peter Rawlinson, head of planning at Rochdale Council, said at the time it was rejected because there was not enough detail about how the site could be developed safely.

via BBC News – Fire at Turner and Newall asbestos factory in Rochdale.